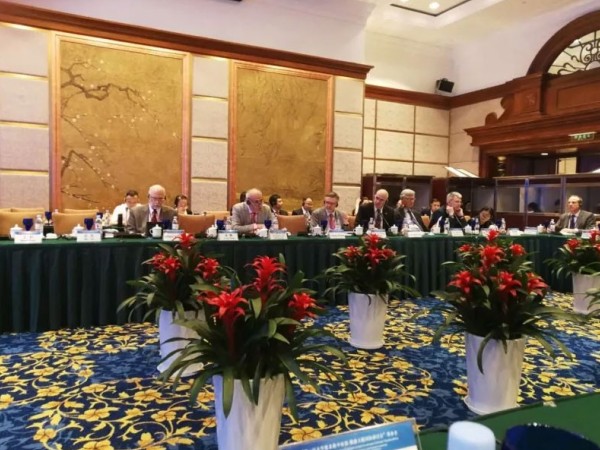 On May 10th, the Preparatory Meeting for the 2nd International Symposium on Peace Applications of Space Technology in Health Themes supported by the International Cooperation Center of the National Development and Reform Commission, hosted by the China Space Foundation, the International Peace Alliance (Space), the Ambassador Club, the World Health Center, and CIIC took place at the Presidential Hotel in Beijing. Astronauts, aerospace scientists, experts and scholars in space medicine, and special guests from the United States, Russia, France, and China gathered in Beijing to exchange and discuss about the purpose of the meeting – the peaceful use of space technology on human health and made valuable suggestions. At the meeting, Chairman Wu Zhijian stated that as the organizer of this conference, China Space Foundation is very pleased to be able to gather experts from the United States, Russia and the space community of astronauts and astronauts in Beijing to jointly discuss the “Space Technology of 2019”. The plan for the peaceful use of the International Conference ". He pointed out that in recent years, space technology characterized by big data, artificial intelligence, and bioengineering has been widely used in popular life, especially in the field of health, and it has brought good news to the people of the world. All aerospace powers should take active actions and be brave enough to take charge. Promote the peaceful use of space technology, especially in the health field. In the end, Chairman Wu Zhijian said that the China Aerospace Foundation will actively support and promote a global conference on the theme of "peaceful use of space technology  " in Hainan, China in 2019. The China Aerospace Foundation will strengthen exchanges and cooperation with astronauts, experts, and entrepreneurs from many countries to accelerate the application of space technology to the field of health to enhance human well-being. Wang Tianyi, President of CIIC, Executive Chairman of the meeting George Abbey, US Chairman of the meeting Li Yinghui, Deputy Chief Technical Officer of the China Astronaut Research and Training Center, and Orlov Oleg Igorevich, Dean of the Russia’s Institute of Biomedical Problems, also expressed their opinions and suggestions at the preparatory meeting. Li Yinghui said, it is a common wish to let space technology benefit humankind and promote the continuous development of space technology. As the chairman of the Russian side of the event, Orlov Oleg Igorevich said, from the warm atmosphere, the growing enthusiasm from the general public to the science industry, and the strong global team, the meeting will be a success and will have its unique position among international conferences and seminars. On May 11th, The Preparatory Meeting for the 2nd International Symposium on Peace Applications of Space Technology in Health Themes was closed as a complete success at the Presidential Beijing. At the closing ceremony, Wang Tianyi, Chairman of CIIC Group, Wu Zhijian, Chairman of China Aerospace Foundation, and George Abbey, Senior Researcher of Baker College, Rice University, Orlov, president of the Russian Institute of Biomedical Sciences, Jean-Louis Monin, French astrophysicist and director of the National Space Research Center, signed a memorandum of cooperation on cooperation as the president of China, the United States and Russia. From May 10th, the Meeting lasted for four days and was divided into two parts: Beijing and Hainan. Experts and scholars from all over the world will conduct in-depth exchanges and discussions on various aspects of space technology transformation to human health, commercialization of space technology, and promotion of civilization in the next few days.